Enjoying coffee continues to be a daily experience for 64 percent of Americans. That number is important because it means that, according to research performed by the National Coffee Association (NCA), 5 percent more Americans are drinking it daily than there were in 2016. Unfortunately, not all of the results in the study were positive as out-of-home coffee consumption decreased from 40 percent in 2017 to 36 percent in 2018, and those who claimed to have a workplace coffee area decreased by 3 percent.

While these new findings might sound negative, they create an opportunity for New York City beans are considered to be gourmet beans. They are more expensive to grow because they need very specific growing conditions, must be carefully handled and roasted to perfection. All of this combined creates a gourmet cup of java.

Traditional coffee is made with beans that are not considered gourmet and was preferred by 31 percent of the participants. This type of brew is usually made from Robusta beans or a mix of Robusta and Arabica beans. Robusta beans are cheaper to grow and easier to handle, but have an inferior taste.

At Home or At Work 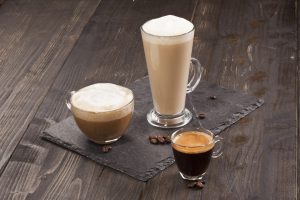 The second step is to understand where employees are getting their caffeine fix. For the majority,  coffee-based beverages are still consumed at breakfast in New York City homes, but there has also been an increase in enjoying coffee between breakfast and lunch or when employees are at work. This second block of time is when an office coffee service can have an impact.

Rather than having to go offsite to find either an espresso-based beverage or a cup of coffee, employees can find what they are looking for in an onsite break room with a cafe-style service. It’s a benefit with a highly perceived value that outweighs the actual cost. Increasing the perceived value is easily accomplished by offering snacks via a micro-market or vending machine. A healthy mid-morning snack with a cup of Joe is a great way to boost your employees’ energy levels.

For more information about adding office coffee service or another vending service option to your New York City break room, contact Group C at 800-761-0810. We look forward to hearing from you.